For 156 professional golfers, the Korn Ferry Tour’s “Path to the PGA TOUR” runs through Music City for the 5th consecutive year.

The inaugural event in 2016 saw PGA Tour veteran James Driscoll win with a score of 19 under par. The 2017 tournament was won by Lanto Griffin with a score of 17 under par climaxing with his winning 17 foot birdie putt on the first playoff hole as darkness loomed.

Lanto Griffin received his PGA Tour Card for the 2017/2018 season but came back to Nashville to defend his Title. Lanto lead after round 3 of the tournament and missed a putt on the 72ndhole to send the event to back to back years of playoff golf. The fans watched as the eventual champion birded the last two holes. Cameron Davis posted a 65 on the final day which was enough to win by one shot at 18 under par. Cameron is from Sydney Australia and had won the 2017 Australian Open to secure his way onto the Korn Ferry Tour for the 2018 season.

In its third year existence, the Simmons Bank Open for the Snedeker Foundation has donated more than $175,000 to its charitable beneficiaries as this number continues to rise each year.

The Snedeker Foundation supports a variety of efforts on both the social and athletic fronts, including Our Kids, which provides expert medical evaluations and crisis counseling services in response to concerns of child sexual abuse, while also working to increase community awareness, education and training about child maltreatment. Through the Tennessee Golf Foundation, the Snedeker Foundation annually supports the Sneds Tour, which puts forth a year-round junior golf tour in Tennessee aimed at allowing kids to learn, play and enjoy the game of golf, while also making competition more affordable through lower entry and registration fees. 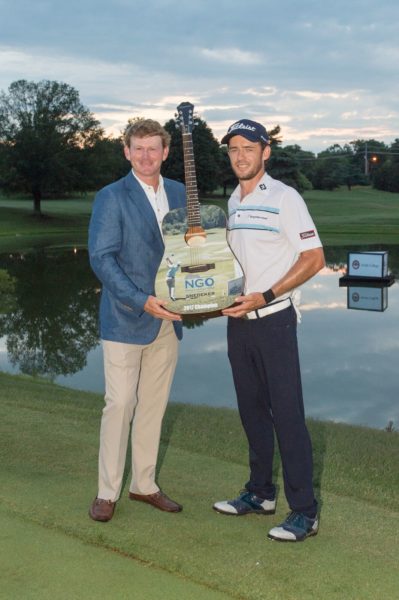