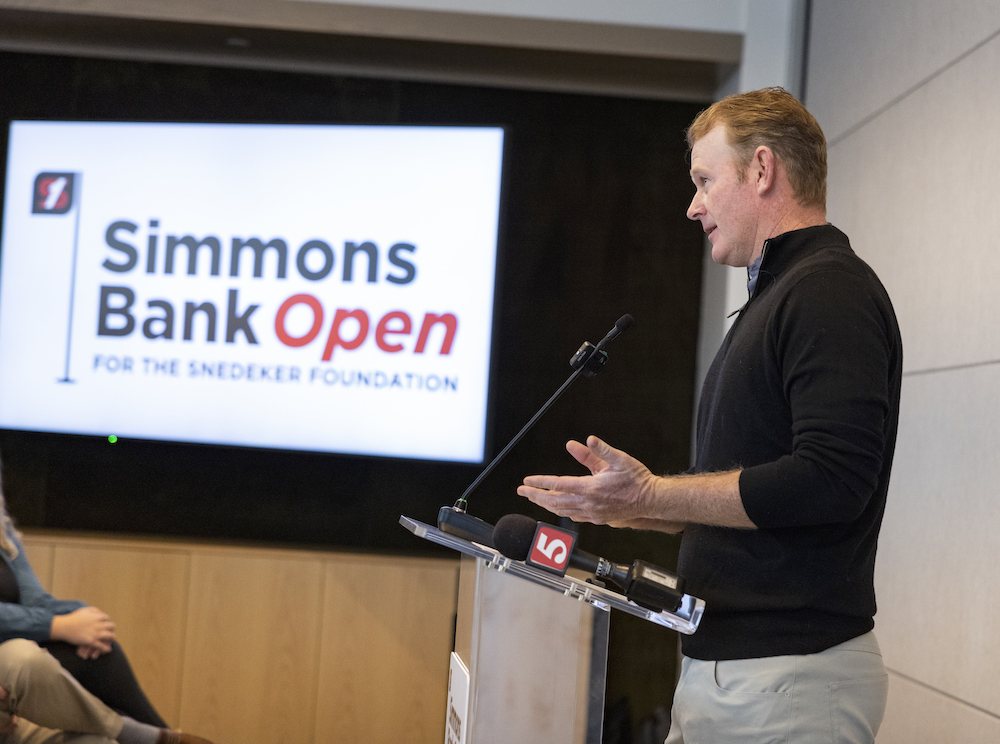 FRANKLIN, Tenn. (November 2, 2022) –– The Simmons Bank Open for the Snedeker Foundation has played to rave reviews the past two years – from players, caddies, fans, Korn Ferry Tour officials and the middle Tennessee community, alike. Now the tournament is being rewarded with an elevated status on the Korn Ferry Tour tournament schedule.

Earlier this month, the Korn Ferry Tour released its 2023 line-up and officially announced that the Simmons Bank Open for the Snedeker Foundation will be one of four events making up the expanded Korn Ferry Tour Finals in September next season.

The 2023 dates for the Simmons Bank Open will be Sept. 14-17 at The Grove Club in College Grove, Tenn. The tournament will join the Albertsons Boise Open, the Nationwide Children’s Hospital Championship in Columbus, OH and the Korn Ferry Tour Championship as KFT Finals events.

This momentous change was marked at an event today in downtown Nashville.

“Through our partnership with the Tennessee Golf Foundation and with the support of Brandt and Mandy Snedeker, the Simmons Bank Open has been recognized as one of the best events on the Korn Ferry Tour and we are proud to have the tournament become a marquee event in the Korn Ferry Tour Finals,” said George A. Makris, Jr., chairman and CEO of Simmons Bank. “This tournament is about more than just the game of golf. It also represents an opportunity for Simmons Bank to support the important work of the Snedeker Foundation and many other organizations in Nashville through community partnerships, service hours and philanthropic giving.”

As one of the Korn Ferry Tour Finals events, all four days of the 2023 Simmons Bank Open will be televised on Golf Channel, bringing additional national exposure to the tournament. Fans and sponsors will also experience upgraded hospitality offerings on-site.

“I can’t explain how truly proud I am of our team, everyone at Simmons Bank, and our hosts at The Grove Club. The Tennessee Golf Foundation believes in providing opportunities, from junior golf to professional golf, for individuals from all walks of life to be successful. We look forward to showcasing that to the golf world next September.”

“I can’t say enough about the commitment Simmons Bank has made to this tournament, as well as the middle Tennessee community,” said Snedeker, a 9-time winner on the PGA Tour. “With the opportunity to make the Simmons Bank Open a Korn Ferry Tour Finals event, the Simmons Bank team was the driving force to ensure it got done.”

“The Snedeker Foundation, myself and Mandy are very appreciative and look forward to continuing to work with the tournament and Simmons Bank to impact the local community in a positive way.”

The Simmons Bank Open supports charities beyond the Snedeker Foundation. At Wednesday’s event, the Simmons First Foundation presented five $10,000 checks to charities affiliated with the tournament’s inaugural Foundation Friday, which took place the Friday of tournament week. Representatives from the Jordan Thomas Foundation, KultureCity, Safe Haven Family Shelter, First Tee Tennessee and Our Kids were on-site to accept these donations to their respective organizations. An additional $10,000 was given to the Second Harvest Food Bank as a matching grant to honor the tournament’s volunteers. For every volunteer during the 2022 tournament, the Tennessee Golf Foundation, Hattie B’s and Simmons Bank pledged to each give $10. The tournament was supported by more than 300 volunteers.

The Korn Ferry Tour announced in August that it would go to a four-tournament Finals, each of which will have a tournament purse of $1.5 million. The Finals will have an elimination format similar to the PGA Tour’s FedExCup Playoffs. The first Finals tournament will have a 156-player field, the Simmons Bank Open will have 144 players, the third event 120, and 75 will advance to the finale in late September. Thirty (30) PGA Tour cards will be awarded at the end of the Finals.

The Simmons Bank Open for the Snedeker Foundation [simmonsbankopen.com] – formerly the Nashville Golf Open – was first held at Nashville Golf and Athletic Club in 2016. Boston native James Driscoll was the inaugural champion that year. Winners since then have included Lanto Griffin (2017), Cameron Davis (2018) and Robby Shelton (2019). Simmons Bank was introduced as the title sponsor of the tournament for the next eight years on Feb. 11, 2020. It was announced on Oct. 29, 2020, that the tournament would move to The Grove in College Grove, Tenn., beginning with the 2021 tournament. Also beginning in 2021, the Tennessee Golf Foundation – a nonprofit organization which promotes golf and its life-enhancing values statewide – took over operations of the Simmons Bank Open. The 2022 Simmons Bank Open was won by Brent Grant, who is now a rookie on the PGA Tour.

Simmons Bank is a wholly owned subsidiary of Simmons First National Corporation (NASDAQ: SFNC), a Mid-South based financial holding company that has paid cash dividends for 113 consecutive years. Simmons Bank operates more than 230 branches in Arkansas, Kansas, Missouri, Oklahoma, Tennessee and Texas. Founded in 1903, Simmons Bank offers comprehensive financial solutions delivered with a client-centric approach. In 2022, Simmons Bank was named to Forbes list of “America’s Best Banks” for the second consecutive year and to Forbes list of “World’s Best Banks” for the third consecutive year. Additional information about Simmons Bank can be found on our website at simmonsbank.com, by following @Simmons_Bank on Twitter or by visiting our newsroom.

The Snedeker Foundation [simmonsbankopen.com] has been the official charitable beneficiary of the Simmons Bank Open since 2017. Founded in 2012 by FedExCup Champion and nine-time PGA TOUR winner Brandt Snedeker and his wife Mandy, the Snedeker Foundation supports a variety of social and athletic endeavors in middle Tennessee, including: Our Kids, which provides expert medical evaluations and crisis counseling services in response to concerns of child sexual abuse, and The Sneds Tour, a statewide junior golf tour in Tennessee that allows kids to learn, play and enjoy the game while also making the sport affordable and accessible.

The TGF operates out of Golf House Tennessee, located in Franklin, and is home to the state’s governing bodies of golf – the Tennessee Golf Association, the Tennessee Section PGA and TGF Junior Golf. Golf House Tennessee also features The Little Course at Conner Lane, a state-of-the-art learning center with a nine-hole, par-three course and driving range, with programming for all ages and skill levels. The TGF focuses on initiatives for juniors, veterans and the disadvantaged, with such offerings as the Sneds Tour – a statewide junior tour – Special Olympics, PGA HOPE, The First Tee, Tennessee Middle School Golf and the Scott Stallings Kids Play Free Program.

The Grove, located in College Grove, Tenn., opened in 2012 and offers an unparalleled golf experience in middle Tennessee. It has quickly gained the reputation as one of the state’s premier private golf facilities. The course features Zoysia fairways and Bermuda greens, which are kept in championship playing condition year-round. It plays to a length of 7,300 yards from the championship tees.