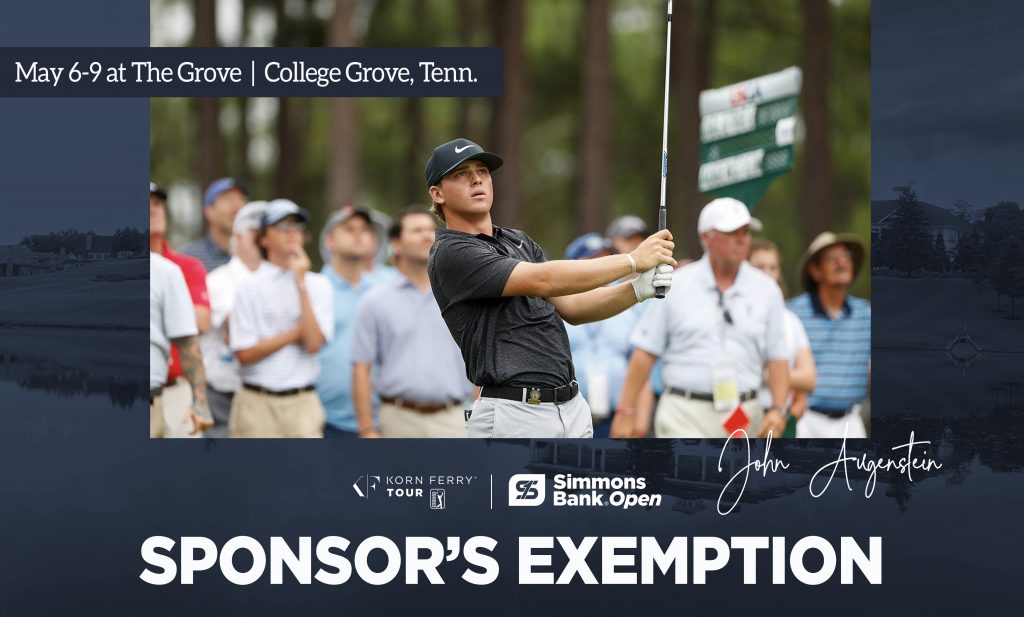 John Augenstein will be returning to a place he is comfortable with to make his first career start on the Korn Ferry Tour.

The former Vanderbilt University All-American and runner-up in the 2019 United States Amateur Championship recently learned that he will receive a sponsor’s exemption to play in the Simmons Bank Open, to be held May 6-8 at The Grove – just south of Nashville.

“I’m very grateful, not only to get a start but to get a start in the Nashville area with a lot of friends and family in the area … teammates and coaches that have been by my side for a long time,” Augenstein said.  “Also, to get a start on a golf course that I’ve played on before and am familiar with is really cool and I’m just thankful for it.”

Augenstein, who was a senior for the Commodores in 2019-20, took the extra year of eligibility granted by the NCAA due to the COVID-19 pandemic and returned to the team last fall.  He remained an amateur to compete in the 2020 U.S. Open and Masters after his U.S. Amateur finish the year before earned him spots in those majors.

The Owensboro, Ky. native made the cut in the Masters held in November of last year and then the next week announced he was foregoing the remainder of his college career to turn professional.

“The timing kind of messed up what I kind of thought the beginning of my career would be,” Augenstein explained.  “My plan was to play the Masters and the NCAA National Championship (in the spring of 2020) and then turn professional like most everybody else does.”

“Coming back to school (during the pandemic) was certainly the right thing for me to do at the time so I could play the U.S. Open and Masters in the fall. It felt like the right time for me to move on. Of course, (Vanderbilt coach Scott Limbaugh) is one of the biggest influences in my life and we are very close.  It wasn’t anything to do with not wanting to be at Vanderbilt. It just came a time when I felt like I was ready to move on to professional golf. I haven’t had the best of starts to professional golf, but I wouldn’t regret or change my decision in any way.”

Augenstein has played in five PGA Tour events this calendar year – all on sponsor’s invitations – but has yet to make the cut in any of them.  He is scheduled to play in the Valspar Championship at Innisbrook in Tampa this week before returning to Nashville, a place he still resides, for the Simmons Bank Open.

“In the position I am in right now, I don’t have status on a tour being a new professional,” Augenstein said. “So getting a spot in any event makes me very grateful and thankful to have it. Every tournament has the ability to kind of change the trajectory of the early part of my career.”

“I think that’s the hard balancing act within it. You know that it’s possible, but at the same time you have to see the bigger picture that this is a long career and not just a one or two-year plan.”

Augenstein made an immediate impact at Vanderbilt as he was named the SEC Freshman of the Year in 2017 while leading the Commodores to their first-ever conference title. That season his team competed in the NCAA Regionals at the same course that will host The Simmons Bank Open.

He competed in his first-ever PGA Tour event in the 2019 RBC Heritage.  Later that year he helped lead the United States to the Walker Cup title in Hoylake, England, where he earned the clinching point with a 4&3 victory over Thomas Plumb.

Augenstein became the second Vanderbilt golfer to finish runner-up in the U.S. Amateur (Luke List, 2004) in August of 2019 when he led Andy Ogletree for 29 of the 36 before falling at Pinehurst.

As a senior in 2019-20, Augenstein earned SEC Player of the Year honors and was a finalist for the Haskins Award, which goes to the top golfer in NCAA Division I.

Just this past Sunday, Vanderbilt claimed its second-ever conference title with a win over Arkansas in the match play finals of the SEC Championships at Sea Island, which was a special moment for Augenstein even though he wasn’t playing.

“Vanderbilt golf will always hold a special place in my heart,” he said.  “I’m so close to those guys on the team and I know I probably always will be. I just know how hard those guys work and I know how incredible the coaches, Coach Limbaugh and (assistant Gator Todd), are.  To see that kind of pay off and see those young guys grow up in such a short time is so cool. It kind of reminds me of my freshman year.”

Nicknamed “Flash”, Augenstein is not only looking forward to returning to surroundings that he is comfortable with, but also the people.

“I know Coach Limbaugh and Gator and some of my teammates will try to get out to watch if they can,” Augenstein said.  “It will be really cool to have them with me. Coach Limbaugh is somebody that I am so close with and knows me so well, I’m excited to let him see how I’m playing, because he knows what I’ve looked liked at my best and he knows what I’ve looked like in some struggling times.”

“He hasn’t seen me play in a while. I hope I’ll play great so he won’t have anything to tell me, but he’s so good at helping me remember things I was doing when I was playing really well.”

As for what kind of test he expects The Grove to offer the Korn Ferry Tour professionals, Augenstein believes it will be a mix of playing some holes conservatively while taking advantage of the scoring opportunities.